iMayflower: How immersive technology is telling the crucial story of the life force under Plymouth’s waves

It is known as the “lungs of the sea” - the very fabric that gives life to our oceans and one of the building blocks of life as we know it on our planet.

And yet for most of us, the existence of seagrass will have barely registered.

But dive deep under the waves of Plymouth Sound and you can see breathtaking fields of seagrass, long rippling leaves giving birth to a myriad of ecosystems of plants and fish.

Its importance cannot be understated - but it’s not particularly easy to communicate.

Step forward artistic partnership Chloe Georgakis and Will Harvey, the creative design collective behind Future Meadows - a project to create an augmented reality (AR) installation that helps people understand just how crucial the life-giving ‘meadow’ of seagrass that spans Plymouth Sound is.

“Future Meadows is a project using art, design and technology to explore marine ecosystems,” explains Will. “We made an AR installation, which is a physical sculpture, and then an AR overlay.”

By hovering a smartphone or tablet device over the installation, observers can literally ‘see’ the seagrass in action and learn more about how important it is.

Chloe said: “We're leaving our sea beds bare and very vulnerable and we were looking at how we can use art and design to tell the story of seagrass - how the seagrass meadow cleans the water, how it stabilises the seabed floor, is a nursery with juvenile fish and sequesters a huge amount of carbon.”

Seagrasses are aptly nicknamed “the lungs of the sea” because they can generate enormous amounts of oxygen. A single square metre of seagrass can release as much as ten litres of oxygen a day.

In Plymouth, the city is in the middle of a four-year project led by the Ocean Conservation Trust to plant four hectares of seagrass on the bed of the Sound. It’s part of England’s biggest seagrass project.

By planting seagrass in the Sound, the project hopes to create more seagrass meadows which provide homes for juvenile fish and protected creatures like seahorses and stalked jellyfish. Seagrass also has an integral role in stabilising the seabed, cleaning the surrounding seawater and capturing and storing significant amounts of carbon. 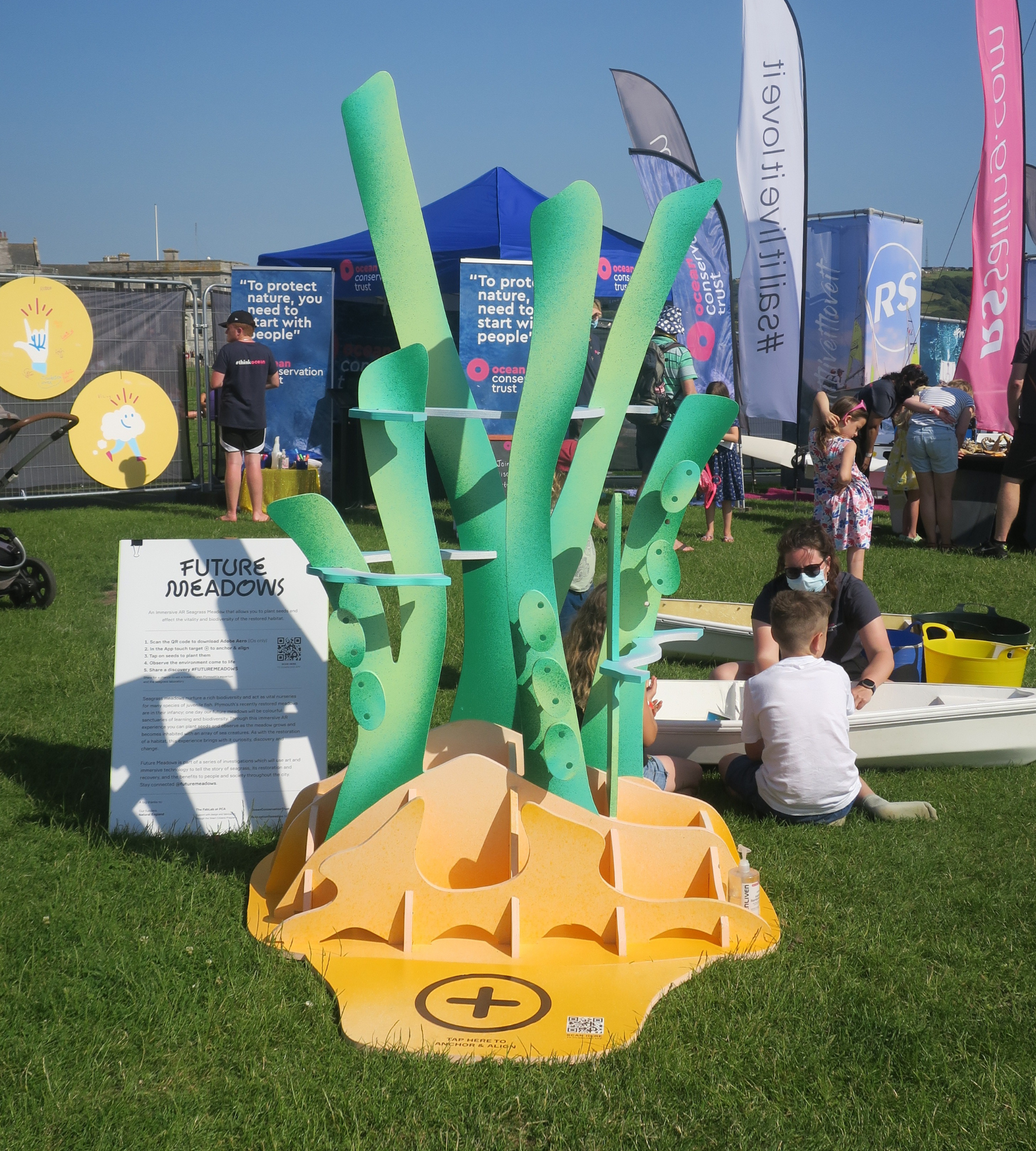 Chloe and Will are playing a key role in communicating the importance of seagrass. They have exhibited the installation at SailGP, the international sailing competition which drew huge crowds to Plymouth’s waterfront, and Illuminate - the annual immersive light show organised by Real Ideas, hosted this year at The Market Hall in Devonport.

“To see people interacting with the piece has been really nice,” says Chloe. “You just endlessly learn through every audience or individual that you watched participate with the piece.”

Future Meadows began life in Fab Lab Plymouth at Plymouth College of Art, where Chloe and Will took part in numerous training through the Smart Citizens Programme, including their renowned ‘Design and Make’ training, learning key skills in 3D computer aided design (CAD) and getting hands on with digital fabrication machinery, such as 3D printers.

They went on to learn more with the support of the Smart Citizens Programme and Fab Lab Plymouth - literally a fabrication ‘laboratory’ aimed at helping innovative designers and creatives - working with cutting-edge fabrication tools. It’s part of a network of 1,000 ‘Fab Labs’ around the globe, and Chloe and Will’s work has been supported by the iMayflower project, which aims to nurture creatives in Plymouth and open up opportunities for them.

They are now full-time creatives, with more inspiring projects in the pipeline, having been approached by Plymouth City Council and the LIFE Recreation ReMEDIES project to support sensitive habitats. 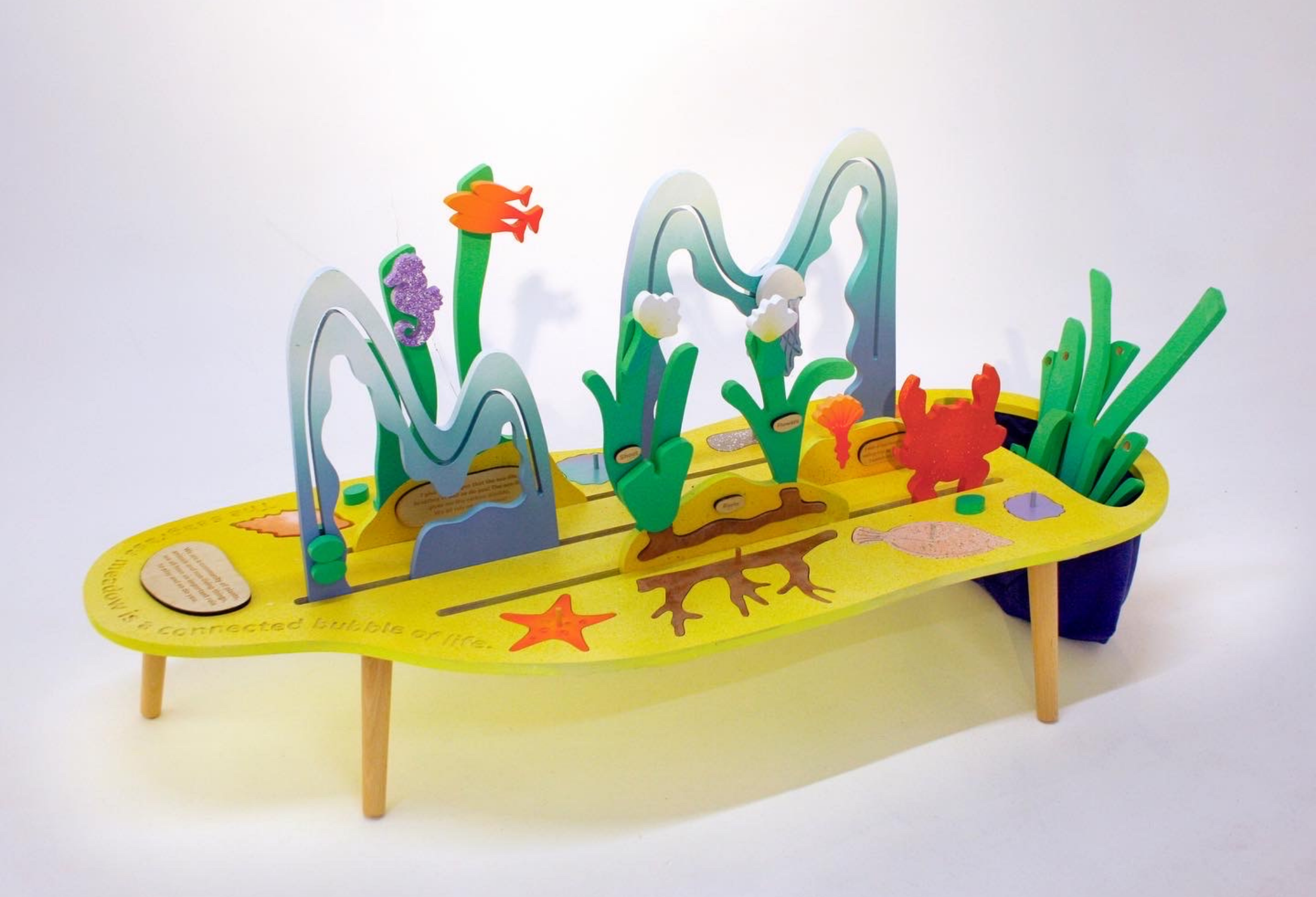 Chloe said: “Now we're working on two other pieces. One is a puzzle for the children where they build a seagrass ecosystem and they play a game and learn about the ecosystem for play and activity.

“The puzzle is an educational tool that will allow the young people to understand and appreciate the values of the seagrass habitat, in a fun and interactive manner. Inviting children to build a seagrass meadow and discover its wonders and benefits through play and creativity.

“Going forward from that, we're part of the Real Ideas Start Something Immersive programme and we're really interested in looking at how we can use augmented reality, to talk about marine ecosystems and to talk about Plymouth being home to a National Marine Park.

“I think it's really important to help people connect more with nature and also to understand their place in ecosystems and their impact on them.”

Will added: “Creativity is a great tool for communicating different ideas. It's a different way for people to be able to digest quite a complicated subject that could be quite hard to otherwise comprehend.”

This activity is part of the iMayflower project and has been supported by The Department for Digital, Culture, Media and Sport, who fund the Cultural Development Fund, which is administered by Arts Council England. iMayflower is led by Plymouth City Council and delivered in partnership with Creative England, Crowdfunder, Destination Plymouth, Plymouth College of Art, the Real Ideas Organisation and University of Plymouth.