Designer, maker and researcher Matt Holmes recently joined Plymouth College of Art as a Technical Demonstrator in Fab Lab Plymouth. We sat down with Matt to find out more about his creative practice, and why he believes that the Fab Lab is for everyone, no matter what discipline your practice originates in.

Matt found his way to design through an unconventional route, initially signing up for a degree in Astrophysics straight after completing his A-Levels. Soon realising that this wasn’t the right pathway for him, Matt returned to the classroom as a science technician, preparing lessons for students. In his spare time, however, Matt was an avid maker.

“I have always enjoyed tinkering,” Matt said. “I was always being ‘handy’, either making signs or furniture. There’s something to be said for looking at what you enjoy doing for fun and developing that interest into a career.” 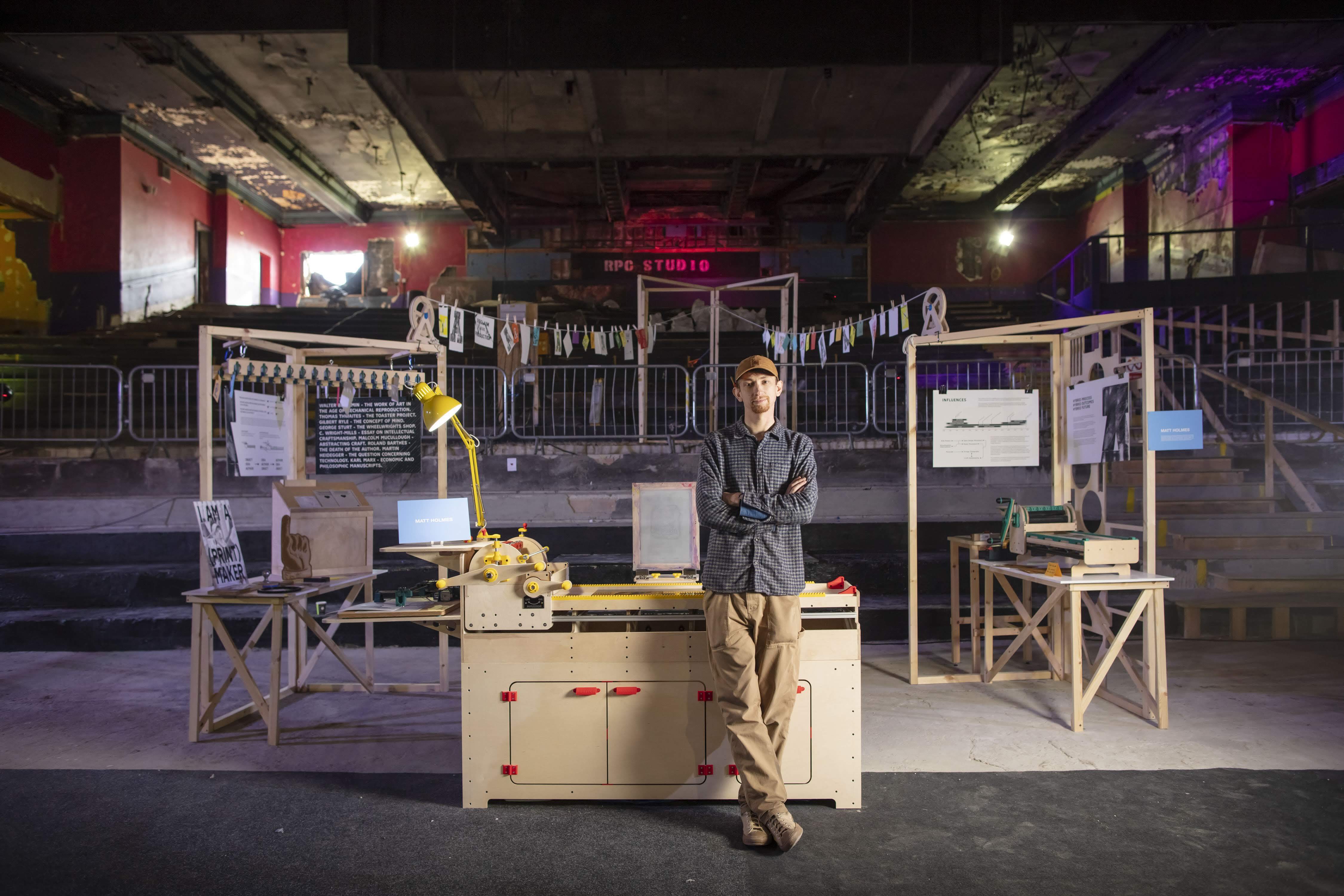 Matt in the Millennium Building, Photo Courtesy of Lloyd Russell, University of Plymouth.

Changing the direction of his career was not a decision that Matt took lightly: “The decision to return to education as a mature student was a big one. I moved across the country from Essex to Devon, which was quite scary. But as a mature student I had a different work ethic to a lot of my peers, and tended to engage with my work quite intensely. Being surrounded by people younger than me taught me that I didn’t have to work quite so manically. In turn, I like to think I taught some of the other students in my group some useful things, like the inevitability of deadlines!” 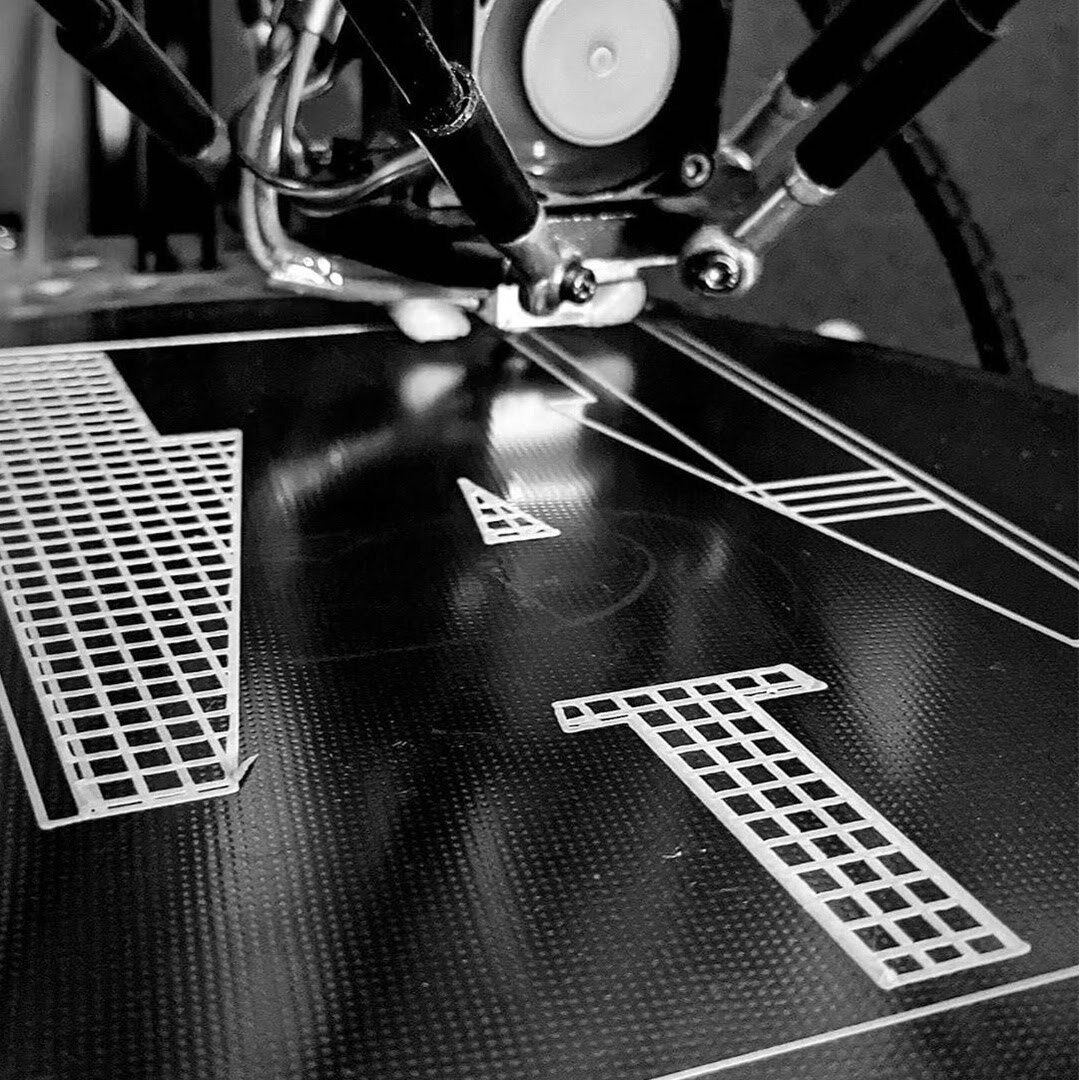 As a lover of big chunky type, Matt is inspired by the work of designers such as Anthony Burrill.

Matt initially thought that his career would lead him towards furniture making. His talents saw him gain a place at The Snowdon Summer School, to learn furniture making from master craftsmen. Surrounded by Chippendale tables and cabinets, Matt saw other students produce pieces using marquetry (the art of applying pieces of veneer to form designs) in traditional patterns, where he interpreted the brief in a different way: “My design was inspired by looking at the carpet and noticing the pattern didn’t quite match up!”.

This appreciation of imperfections became a theme that led Matt’s work towards typography. The discovery of a damaged, forgotten typeface in a workshop led him to consider how he might restore it. “I recognised that the marks and imperfections told a story”, Matt said. His use of modern technologies like 3D-printing, together with legacy techniques, led to a fascination with democratising heritage processes such as letterpress and typesetting.

Matt was in the middle of developing his letterpress equipment when the COVID-19 pandemic first hit, during his BA. “I realised pretty quickly that I wouldn’t have access to all these tools in the workshop, that channelled me into using the tools I had at home, like a simple jigsaw. It forced me to consider the tools other people had around them. I realised how inaccessible these heritage techniques were to others. Without use they die out. It made me ask myself how can I make them accessible to a wider audience?”

The culmination of this work saw Matt successfully create his own letterpress printing press, including the instructions to build it, distilled into an email. “Theoretically I can send this to anyone, anywhere in the world and they will be able to build it. It makes it available to all”. One of the first people Matt sent it to was printmaker Anthony Burrill. “I have always admired his work and to have him respond to me was such a fantastic boost, I couldn’t believe I was having a Zoom conversation with him whilst sat in my shed!” 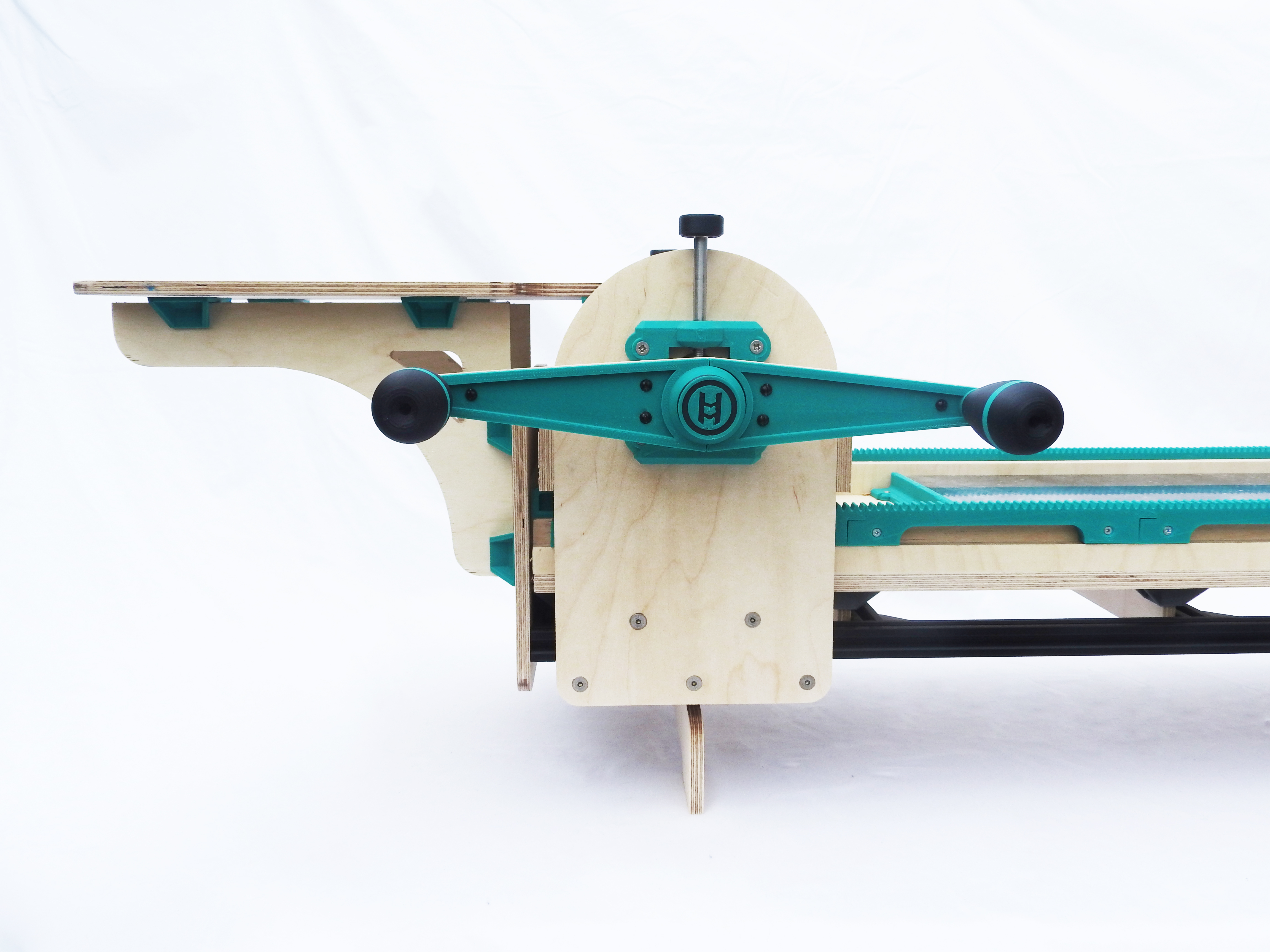 “Heritage is a concept, quite different from History,” Matt said, “which I believe can risk a craft getting locked in, with people saying ‘it’s the way things are done’, which can become a form of gatekeeping. What carpenter would lament the invention of the electric drill? I don’t feel that new technologies change the skill. After all, a potter throwing on an electric wheel is still creating with their hands. I engage with my letter press as I pull the print by hand - and that physicality keeps the magic of the craft in there.”

Matt brings this ethos of democratisation into his work in Fab Lab Plymouth. “I recognise that the Fab Lab space can be intimidating to enter”, Matt admits. “It has big machines that look dangerous and if you’ve never worked in this space before, it’s easy to think that it might not be for you. The reality, however, is that this space is for everyone. I haven’t been working here long, but already we’ve supported BA (Hons) Illustration students to explore how they can use the laser cutter to make tools to work in the printmaking space. There is lots to learn through cross-pollination between disciplines. Come down and discover what you can do! There is so much that computers make possible that you can’t do alone by hand. My favourite slogan for the Fab Lab is ‘We are part of a bigger process’ and I truly believe that.”

In Matt’s personal practice, he continues to add to and modify his letterpress. For Matt, the letterpress has become symbolic of his creative journey, as a designer, a maker and a printmaker. As a Technical Demonstrator in Fab Lab, he’s on hand to help students with their own creative journeys.