Devon Guild of Craftsmen is a charity arts organisation, with over 240 selected members who have the opportunity to showcase their work and receive advice, support and professional development from established artists.

Guild Member Roberta Ayles, a glass artist who has been experimenting with glass and ceramic processes for 40 years, describes how her intial sessions in the Fab Lab have informed her stained glass practice. 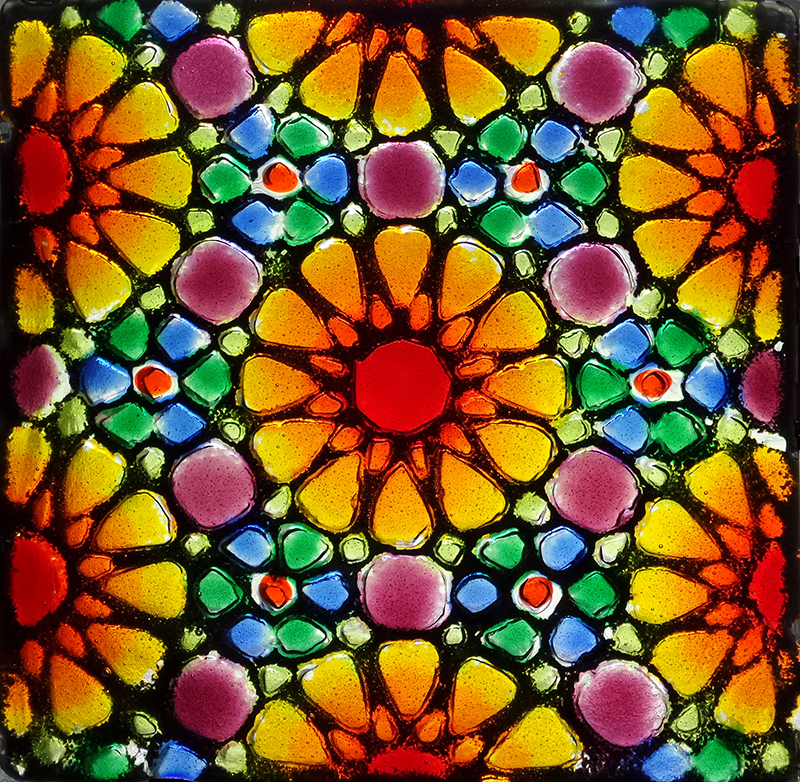 "My design was borrowed from an Islamic mosaic, and then cut in 3mm Perspex on the laser cutter. From this, I took an impression in clay, and from the clay I cast a plaster and a Gelflex version. From the Gelflex I took another plaster cast, so I had a positive and negative of the same design."

"I was particularly interested in geometric or intricate patterns which would have been very time-consuming to cut by hand, and I look forward to trying different colourways from these moulds."

Roberta has gone on to produce a piece for her summer exhibition using a mould made with the Fab Lab Plymouth laser cutter.

"The initial session was fascinating and sparked off several ideas. I would be really interested in investigating how I could use CAD and CAM to speed up the initial stages of manufacture."

Devon Guild Exhibitions Officer Flora Pearson has also been exploring the facilities at Fab Lab Plymouth and has looked at the potential of the laser cutter in relation to print making.

"I have been attending the FabLab course for four weeks and have found it enthralling, exhausting, inspiring and exciting in equal measures – it’s a journey beyond my comfort zone. I have been working on ways to produce a block for hand-printing wallpaper as the technology would provide a precision which would be really useful for matching up or tiling a wallpaper design."

"My experience of working alongside other craftspeople in the FabLab has shown me that the end product of the machines is very much the tip of the iceberg. Everyone has a lot of knowledge, experience and understanding, and is looking for ways to push the boundaries of what can be produced; to perhaps create something which would have taken hundreds of hours, or reproduce something more than once for example."